The El Cerrito Historical Society offers "open hours" at the Dorothy & Sundar Shadi Historical Room (located in City Hall on the 2nd floor) on the third Thursday of every month from 4:30 - 6:00 PM . You can also contact the Historical Society to arrange an appointment.

Check the online calendar for dates the History Room is open.


The following brief history was prepared by the El Cerrito Historical Society:


In the days around 1900 most of the hills were bare - very few trees. There were more cattle in the area than people. There were several dairies and chicken farms along the hillsides. The main thoroughfare through the area was San Pablo Avenue with businesses from the County Line near Fairmount Avenue (then called Road 4) to Potrero Avenue (then called Stege Junction). None of the roads were paved so there was dust in the summer and in the winter people had to contend with mud. Between Fairmount Avenue and the county line it was almost impossible to get through without boots on.

After the 1906 earthquake and fire in San Francisco the village of Rust started to grow as refugees from San Francisco moved to this side of the Bay to live.

Wilhelm F. Rust born in Hanover, Germany on November 27, 1857 came to California in 1883. He leased property, built a blacksmith shop and his business grew. He later purchased and erected a hardware store. In one corner of his hardware store the first Post Office was opened in 1909 and Rust was named the first Postmaster on March 1, 1909.

People started to refer to the town as Rust and the name stuck until the town of 1500 people was incorporated as a city on 1917. The people did not care for the name of Rust so they changed it to El Cerrito, which means Little Hill in Spanish. Rust has been called the founder of this city and was well liked by the people and praised as an honest, trustworthy citizen and businessman.

The first board of trustees (City Council) included Kirk Gray, John Sandvick, Philip Lee, George Adams and Peter Larsen, with George Scott as treasurer. Mrs. Grace Castner was elected first City Clerk, Henry Wildgrube was City Attorney and George Barber was appointed the first City Marshal. His job also consisted of tax and license collector, street inspector, building, plumbing and electrical inspector.
The first thing the City Council did after the City was incorporated was to levy a large license fee for each of the saloons in town to pay the wages of marshall, clerk and treasurer, and for other needs of the City. Quite a revenue was collected for the City as there were almost twenty saloons scattered about the community, but mostly along San Pablo Avenue.

In 1917 the city of 1500 people was without fire or police protection. This is the reason El Cerrito was incorporated, so it could raise tax money to provide services which the people needed. Priority was given to a street paving program and soon after the incorporation the driving of cattle down San Pablo Avenue was stopped. The farmers used to drive large herds down the streets to the slaughter houses. This would cause the dust to fly and people started to complain and demanded it be stopped. There was a corral on the south side of Fairmount Avenue just west of the Santa Fe tracks where ranchers drove their cattle to be shipped by rail or to store them for a drive to the slaughter house on Central Avenue. 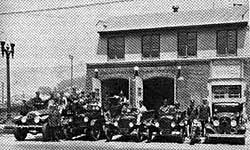