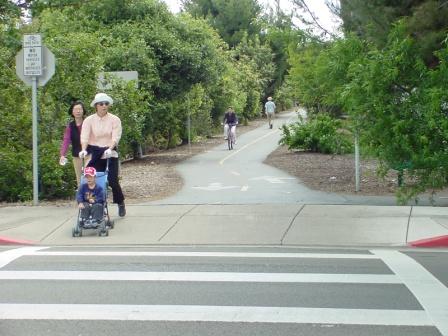 The El Cerrito Ohlone Greenway is a 2.7-mile multi-use trail and Greenway that traverses the City of El Cerrito, underneath the elevated BART tracks, from the south to north City limits. The City's General Plan calls for improving the Ohlone Greenway by identifying several strategies, goals and policies related to the Greenway.

The Departments of Public Works and Recreation took the lead to work with the Parks and Recreation Commission to develop an Ohlone Greenway Master Plan to fulfill goals identified in the General Plan. Multiple community meetings were held to gather input from the community and the El Cerrito City Council adopted the Ohlone Greenway Master Plan on June 15, 2009.

The Greenway will be partially damaged during BART Earthquake Safety Program activities beginning in 2010. The City will work with BART so that restoration of the trail is consistent with the goals of the City and residents as identified in the Master Plan. Other trail improvements identified in Master Plan may be pursued concurrently or separately from BART's Earthquake Safety Program restoration.
Home Page
Return to home page
Bids
See open opportunities
Facilities
Find city offices and parks
Get Involved
Connect with the city
Jobs
Work with us
Meetings
Agendas and Minutes
Municipal Code
El Cerrito's city code
[]