The El Cerrito Police Department (ECPD) has used Bicycle Patrol since 1998. The bicycles are a great way to patrol areas that are difficult to access with a regular patrol car, such as the El Cerrito Plaza, the Ohlone Greenway, and the parks. The bicycles put officers in closer contact with the community members. The Bicycle Patrol assignment is an ancillary duty of our personnel. None are currently assigned to it full-time. However, as staff levels and weather permit, one or two officers ride on any given day. The times of operation vary. Sometimes they ride during daylight and hours of darkness. 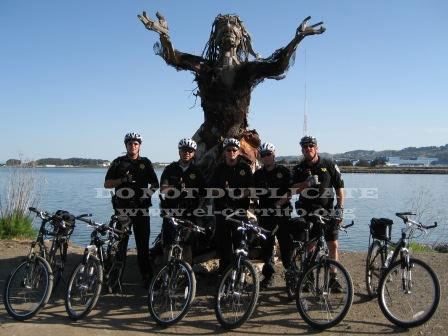 The bicycles are an alternative means of patrolling to which many criminals are not accustomed. Bicycle Patrol officers have been known to intervene in crimes in progress because the suspects did not see them coming as they often do with regular patrol cars. Other benefits of the program include:

The ECPD takes great pride in the program. We are certified by the California Peace Officers Standards and Training (POST) to conduct training for our personnel as well as those of other CA agencies. We currently have over 30 sworn officers, from the ranks of reserve, officer, corporal, sergeant, and lieutenant that have been through the physically demanding 24-hour bicycle patrol course. All personnel are encouraged to complete the training.

Every year the ECPD puts on the only POST-approved Bicycle Patrol Update training in the Bay Area. All bicycle patrol qualified personnel go through this 4-hour course to hone their riding skills.

We have also implemented a modified Bicycle Patrol training program for our explorers. While not able to ride on regular patrol, they can be seen riding with police officers on special occasions such as parades and community events.

The ECPD has also trained agency personnel from the following agencies:

Our courses are in such high demand that we maintain a waiting list for other law enforcement agencies who want to send their personnel to this training.

Thank you to the individuals and businesses who support the Bike Patrol Program, including: